Taking part in the Silence Experiment at Agile 2017 made me more determined than before that running this type of session with students would be a good idea. Being offered the chance to start teaching our Human Computer Interaction course at the University of Aberdeen created an opportunity for me to ‘run the experiment’ and see what happens.

Thanks to all of you who’ve taken part in my running of this experiment.

Setting up the session took a bit of thought. While I couldn’t use same prothetic hand kits used by Sal Freudenberg in her versions of the experiment, which I covered previously, I could use the Lego Serious Play starter kits that I already have as an LSP facilitator. This meant the work would not be as meaningful, but given the audience, would probably work just as well. I used LSP Starter Kits and assumed teams of three or four students per team. I also wanted to have a slide deck to guide participants, along with a workbook that offered many of the same instructions so that they could work at their team pace too. Lastly, signs where prepared for the doors so that people would know what to expect as they entered the room.

The basic setup and assumptions

This was for the first practical session of the class and ran in the first week and set the tone for what follows in the classroom. Given this was a new practical session I had to run each of the three sessions on offer as I thought it would be too much to be dropped in someone’s lap if they’d not experienced this before, let alone facilitated many workshops. 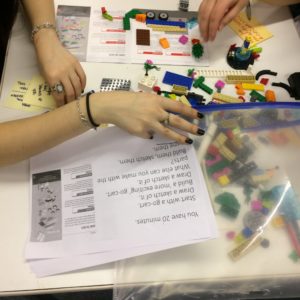 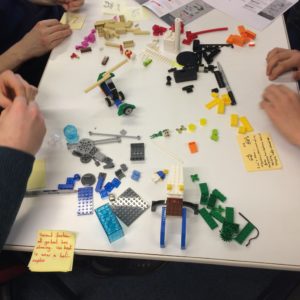 My goal was to put all participants on equal footing and experience something different. They should all experience ‘a level playing field’ and feel their ideas are being considered too.

To that end I had them build two different models. The first is a straight forward one with eight steps, which they could follow. The second and subsequent model had general instructions, which they could interpret variously according to their design preferences. More about this later. I wanted them to empathise with others for that hour of silence.

What happened in the sessions

Given this was done during a regular teaching term. I had to clear students out of the room each session, and then set it all up with the help of my demonstrator. This took us about fifteen minutes to do as we set out Lego kits plus instruction booklets that I’d printed from the slide deck, along with a pack of sticky notes and pens at each table. We also had to move tables around so that students could sit around a table instead of in a row as these were computing labs. This was not ideal, but worked well enough for our purposes.

Before they entered the room I would tell them that silence reigned once they entered the room and that they should enter and put their coats and bags down and find a space at a table. They should also form teams of three where possible and await further instructions in silence.
After all was settled and we’d rearranged students into trios instead of pairs, I gave a brief intro to the session, and then we started the building. During this time my demonstrator and I would wander and remind them to write down their thoughts as they worked through the experiment, show them the colour version of instructions in the Lego kit, and keep them on the right page for the more challenging instructions. 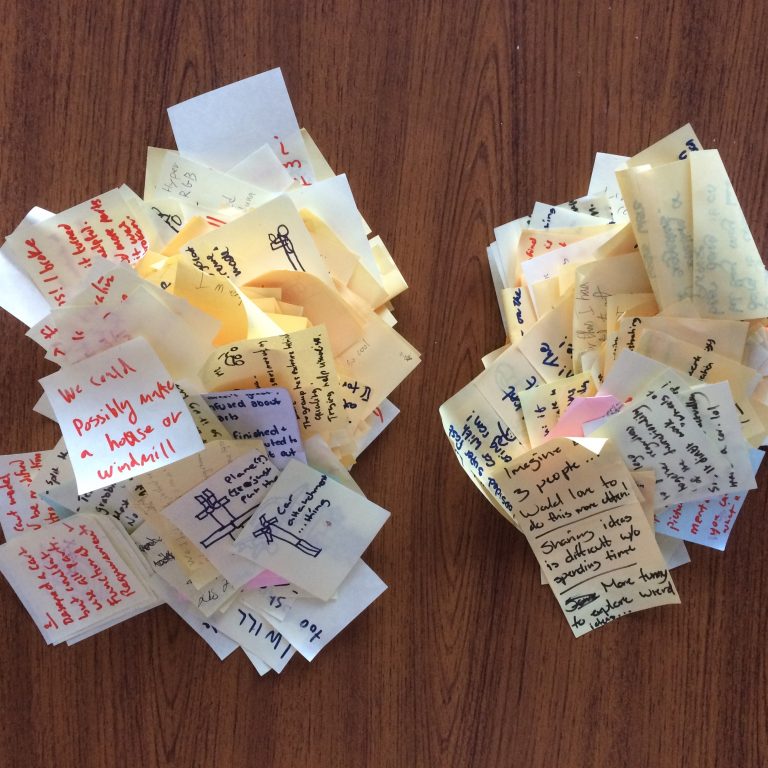 I noticed that some students ‘cheated’ with notes written to team members as ‘instructions’ and ‘questions’. (In the photo above, the stack on the left contains instructions, while the one on the right contains reflective comments.) While we tried to stop this and suggested at the start that they will get more out of the experiment if they didn’t do this, it happened nonetheless. I also noticed a lot of ‘oops, sorry’ and shrugging of shoulders during the sessions as students delved deeper into the experience. Some students also quickly colour coded and sorted the pieces to make finding pieces easier, while in one session all teams bare one, kept the Lego bricks in the bags and only took out the pieces they needed. That was a very quiet session.

At the end of about 45 minutes they were done with their final thoughts, and we moved onto the discussion as a group.

I worked through a number of the same questions that the Inclusive Collaboration crew also used with their sessions, and then added a few of my own:

The first ones ended up being similar to what experienced in Agile 2018, and read about in various blog posts, after a bit of teasing out of the concepts and ideas with them. They thanked their team mates for a good time, and apologised for their mistakes. They also realised that much of what we say is ‘filler’ and the need disappears after a bit of time. The surprises for them were the speed with which they worked and collaborated in silence. 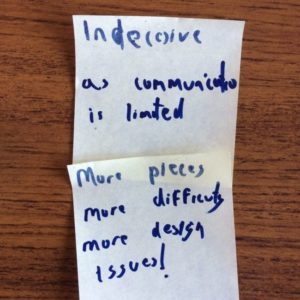 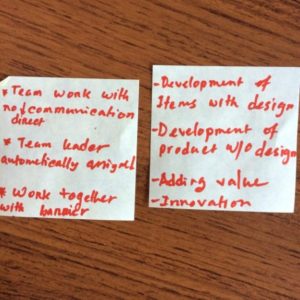 There was also a discussion each session about whether they would’ve worked faster if they were able to talk. We always concluded that they probably wouldn’t because they would ‘talk, talk’, and not ‘act act’ and thus take longer. They realised that by acting and building something to show their team members to let them see what they were thinking avoided many misunderstandings, which would normally arise during talking.

A key part of the way I run this is to let participants ‘follow instructions’ in the first part, and then make them collaborate on design in silence in the longer second part. The second part is when the team need to decide how to collaborate to design items, and where the ‘act act’ seems to win as first one person tries out something and others join in to design the item, and to then experiment with the design. This was emergent design at its best.

Running this at Play4Agile 2018

I also ran this session at #p4a18 where we had only one team of three plus two who came and then left again. This was an unconference with many other sessions on the go, and on the first day. It was useful.

This session added a new twist: how do you bring a new person into a silent group? How does that person indicate their intention to help, or guide the team? Both ‘newcomers’ did this differently, and in the debrief we discussed how this was perceived by the ‘fixed’ team. Beyond that similar discussions also arose. One of the participants had also been at the Agile2018 session mentioned above, and was able to offer insights into the comparison of these two. For that person the ‘meaningful work’ of building the hand was paramount and added gravitas to the work. Using Lego Serious Play kits will never come to that level. However, it does offer more experimentation with the design issues participants face, while also making the session more easy for others to follow too.

The materials to run this session yourself can be pulled down from these links:

Slides to show on screens during the session and to guide discussion. Silence_Experiment slides Handouts for table groups (slides 4-9) You may want to print the ones with Lego pieces in colour for piece identification if you don’t have the Starter Kit instruction booklets.

If you do use run this yourself, then please let me know how it goes. It’d be interesting to compare notes.