While at #Agile2017 in Orlanda I was able to participate in ‘The Silent Experiment’ being run by Sal Freudenberg, Katherine Kirk , and Chris Corriere, as part of the Audacious Salon. I’d missed this in Edinburgh during it’s unveiling at Lean Agile Scotland, and had read about it in Sal’s ‘Inclusive Collaboration Experiments‘ book, where it’s described as a way to let people better understand the diversity of their colleagues as part of their neurodiversity work. 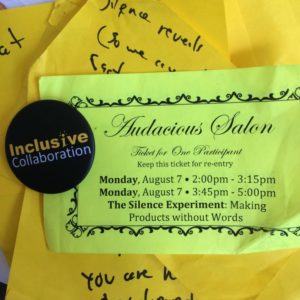 The experiment ran as follows: enter the room and sit quietly at a table so that you form a team of three. Sal set the context for the session and told us when we could open the package and instruction booklet to begin. We had 40 minutes to complete the assembly of the prosthetic hand, decorate the container and take a photo to include in the parcel for the person, who’s to receive the hand. I formed a team with Pia and Lisa Crispin. I found the session exciting and intriguing because we were doing meaningful work. This is something Sal mentioned, that was an integral factor in her early versions of the workshop, whih used Lego. Participants found it less engaging when the work was ‘build a model’, and that the session went better when she switched to hands. I also found it frustrating when I wanted to share ideas, but couldn’t because of the silence. Katherine, happily, kept walking around with a post it that said something like “write down your thoughts and feelings as they occur” so that we didn’t forget them for the debrief later. The frustration was as much about good thoughts as much as about ‘oops, I think I did it wrong’ ones and wasn’t sure how to explain my concern. We did get there in the end, and Lisa kept us going well by pointing out that all pins should be not flush, but recessed into the hand. I found the silence revealing for a number of reasons. First, there wasn’t pressure to keep talking, and we could focus more clearly on the work without the noise from other tables to distract us. Second, we could consider our repsonses to issues as they arose more carefully, and respond differently than we might have otherwise done if we’d all been talking through the building of the hand. Third, while it was hard to share confusion about something, or to ask if others are also confused, it was comforting to trust your partners too as we all eventually worked our way through the produres. When someone had problems, then we’d offer via gestures, another team member a chance to try the step.

#Agile2017 We did it – in total silence except for chuckling! Thanks @SalFreudenberg @kkirk @cacorriere pic.twitter.com/O4dfpApypb

The experiment revealed too, that doing meaningful work is an important part of this experiment. For me and others, knowing that the hand we were assembling would change someone’s life meant a lot to what we were doing. That offered a huge amount of empathy and love for the activity. Building a model with Lego just isn’t the same. However, I’ll probably try it this next term using some of the Lego Serious Play sets as my own experiment. This ‘meaningfulness’ then becomes a debrief point.

All of this is by way of showing how we need to have more diversity in our workplaces, and be inclusive so that end the usual monoculture. Come join the crowd at http://inclusive-collaboration.org/ and do what you can to help spread the word. 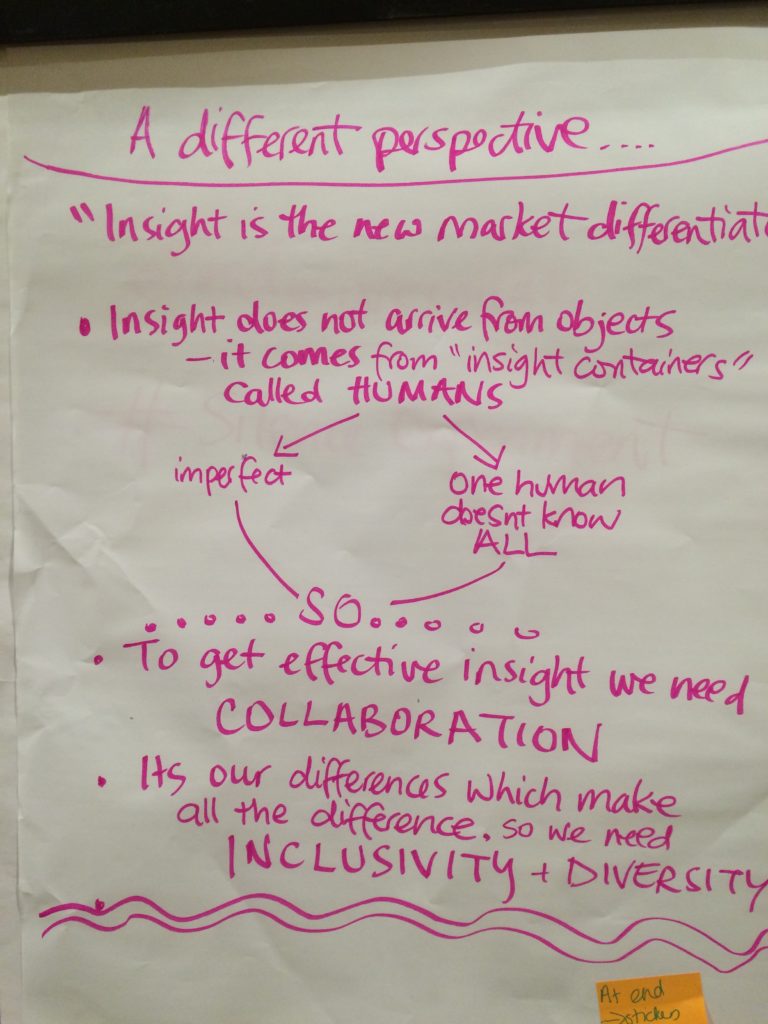 As Katherine’s poster noted: “insight does not arrive from objects – it comes from ‘insight containers’ called HUMANS” Humans are imperfect, and no one human can know everything, so  we need collaboration in order to gain effective insight. And the best collaboration is that which fosters inclusive diversity.

One thought on “The Silence Experiment at #Agile2017”

[…] use same prothetic hand kits used by Sal Freudenberg in her versions of the experiment, which I covered previously, I could use the Lego Serious Play starter kits that I already have as an LSP facilitator. This […]