How do Lotka-Volterra competition models relate to niche theory?

There are 4 possible outcomes to the Lotka-Volterra models.  One species competitively excludes the other or there is coexistence.  Coexistence can be stable in the longer term or unstable, in which case a change in environmental conditions (for example) can tip the balance in favour of one species or the other so that it is able to exclude the other species.  The fundamental niche of a species is the combination of conditions and resources that a species is able to inhabit in the absence of a competitor.  If a competitor is present, the species may only be able to inhabit a reduced niche space, described as the realised niche.  In this case, the species has been competitively excluded from part of its fundamental niche.  This is the situation shown in the Lotka-Volterra models where one species competitively excludes the other.  In some situations a species might be competitively excluded from the whole habitat or the species may demonstrate niche partitioning, with each species inhabiting a different part of the habitat.  The Lotka-Volterra models showing coexistence are represented by species which have an overlap in their realised niches.

A PhD student has decided to replicate some of Gause’s experiments with Paramecia species and to see if she can also apply Lotka-Volterra models to her results. She set up 4 trials of culturing 2 species of Paramecium: aurelia and P. bursaria.  After her first experiment, she plots the figure shown here.Values are numbers of individuals/ml.  The starting point of each trial is shown marked with a circle.  Apart from different numbers of Paramecia to start each trial, all other experimental conditions were constant.  Explain the interactions between these 2 species of Paramecium in terms of Lotka-Volterra models.  What can you say about the likely outcome of this interaction?  How can you explain the outcome? 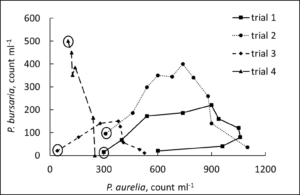 In a classic experiment, David Tilman and co workers looked at competition between freshwater diatoms and the concentration of silicate in their growth medium. Silicate is essential for the construction of cell walls in these species and is often a common limiting resource for diatoms.  They plotted the figures shown here.  Explain what is happening in relation to competition and the concentration of silicate in these experiments.

Figures 2 and 6 reproduced with permission of John Wiley & Sons.

© 1981, by the Association for the Sciences of Limnology and Oceanography, Inc.

2.4 Interactions between species of Paramecia

When Paramecium aurelia is grown in culture with P. caudatum, P caudatum is competitively excluded. However, when grown together, P. aurelia and P. bursaria are able to coexist.  Paramecium bursaria appears slightly green when viewed down a microscope.  No other Paramecia show this colouration. What is responsible for this colouration and how might it affect its interaction with P. aurelia?

Researchers investigated these interactions on on a game farm near Kimberley, South Africa. They determined home ranges by radio-tracking all 3 species and calculated the density of the three species from family groups (figure 1); looked at time of activity (figire 3) and diet (figure 4).  Jackals killed 9% of collared Cape foxes and ~30% of collared bat-eared foxes, sometimes for food but in some situations they left the bodies of the animals they’d killed. 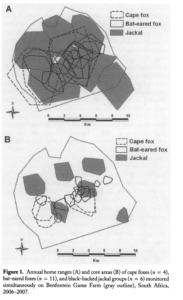 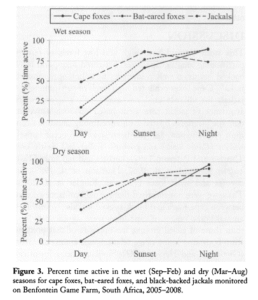 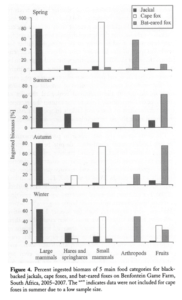